Your shopping cart is empty.

Long ago, further back than the first stones date, swirling clouds of

One theory says the dust came from the explosion of a twin Sun,

explaining how they came to be so close to the Grandfather. Of

course, no one really knows exactly what happened.

Most scientists agree that gases and space dust were pulled into

orbital paths around the Sun. Somehow these gases began to liquify,

raising the temperatures of these swirls, then as they gained

energies that spawned ours, and the planets around us. Many of them

on Mother. Others have been transformed, reshaped and moved by the

The oldest stones have been dated back 4.5 billion years. Most

years ago. Many of them date back to the shifting of the continental

mixed with the tremendous friction created by the massive forces at

The geological truth is, these conditions still exist. In some areas

(mostly below the oceans), only three miles separate Earth's outer

crust from her molten heart. Most of the time, there are 20 to 30

miles of insulating stone between you and the magma. Continental

plates in the Himalayas Mountains are still pushing together, as they

are all around the world. As much as an inch a year in some regions.

All this means, stones, gems, crystals are still being formed, the

process is not complete.

good, your fullest potential. Inside every stone is the story of

change, evolution, strength and improvement. Inside every stone is

your story of challenge, survival and spiritual triumph.

In the simplest geological terms, there are three basic types of

stones that you will find in your back yard. Igneous, sedimentary and

metamorphic. The formation of these stones is as complicated and

diverse as the most rare crystal, even breaking down into several

These are some of the oldest stones on Mother Earth. Formed by the

cooling of molten magma, many of these original stones contained high

concentrations of minerals. As Mother slowly aged, these minerals

would precipitate out of these stones, which then became perfect

all examples of Igneous stones. Extremely hot liquid minerals that

cooled into solids. These are the teachers. The stones that will

help you see your greatest potential. If your lessons are endurance,

persistence and spiritual maturity, or if your path involves any kind

of learning, carry an Igneous stone from your back yard.

You can recognize these stones by their hard, compact appearance.

Some may have a crystallized surface.

Stones that are formed by the weathering process of the planet. As the

mountains wear away, the gravel, dust, sand is washed into creeks,

hillsides, ravines and valleys. It collects, building layer over

stones from the remains of the old.

Sedimentary stones are created from their environment, just as we are

shaped by ours. Often, when our childhood environment was painful, we

carry those pains with us. Using Sedimentary stones can help you

become a new person, by breaking down those old walls, and building

something more beautiful and much stronger from the remains.

Chrysocolla, Turquoise and Selenite are some of the stones formed

through the sedimentary process. You can pick these stones from you

yard by looking for layers within the stone, a tendency to crumble

and they also weigh much less than other stones of equal size.

These are stones that were quite literally smashed together by

together creates friction, causing nearby stones to become heated to

the point of being very soft, but not quite liquid. This halfway

point allows the different minerals to be folded together.

Charoite, Tiger Iron, Jadeite and Nephrite are examples of

yard, look for folded lines, distinctive zones or a woven together

appearance. These will be the most difficult stones to locate, unless

you live in a geologically active region.

As survivors of change, a Metamorphic stone is your best companion for

navigating the changes in your life. They will also help you initiate

change from within. Meditate with this stone to examine your

motivations, goals, desires. Are these really what you want? What are

you doing to achieve them?

Use your free Stones exactly as you would any crystal or gem. Cleanse

them before using, introduce yourself and your intent and charge it

If stones are not readily available in your yard, try a nearby stream

or creek. The dirt road that goes into the woods by my house offers a

treasure trove of stones. It's hard not to bring them all home.

Please be aware, that if you are in a national or state park, it is

against the law to remove anything. Be sure to leave a gift behind

when you collect your stone. Some recommend tobacco, personally, I

Let customers speak for us

My daughter likes her anklet. Great quality. Will be ordering from shop again. I’m

Always have it on…thank you:)

My spouse loved the bracelet she got for Christmas.
It was well made and put a smile on her face as soon as she opened it.

The anklet was exactly as pictured on the website and the size was also as specified in the order. Glad I made the decision to purchase it!

It is absolutely beautiful. The craftsmanship is amazing. To say I love it would be an understatement. Thank you so much for putting so much love and effort into making my piece. You are an amazing artist and I am so incredibly grateful and happy that I found you. It is slightly bigger than expected(most likely my fault when I measured my wrist before I ordered it), and after reading the review that it will stretch just a little, and I am hoping it end up rolling up and down my wrist more than it does now and catch something on accident and break. This is totally my mistake and by no means a reflection of the quality and craftsmanship of the bracelet. I still love it. 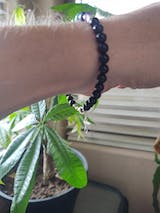 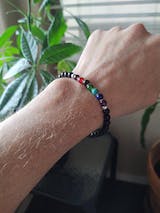